UATP, CPD to take on the ALS Ice Bucket Challenge

Next week, UATP along with the Center for Persons with Disabilities will take on the ALS Ice Bucket Challenge to show solidarity for one our clients and friends, Kim Maibaum. You can help by taking the challenge yourself, donating to the ALS fund or Kim's care fund, and coming and cheering us on!

My Friend Kim
By Deanna Taylor

My name is Deanna and I was nominated by a friend, Wendy Shelton, to complete the ALS ice bucket challenge. It's been well over a week, but I waited to complete the challenge so I could introduce to you my friend Kim Maibaum.

When Kim was 50 years old, she was diagnosed with ALS, more commonly known as Lou Gehrig's Disease. ALS attacks your muscles and nerves. The symptoms initially begin with mild muscle stiffness followed by severe weakness and then paralysis of the muscles of the limbs and trunk. Eventually, ALS will affect other vital functions such as speech, swallowing and for many the inability to breathe without a ventilator.

Unlike you and I, if Kim has an itch she is unable to scratch it. If her arm or leg position is uncomfortable she is unable to adjust it. One of the few things ALS does not affect is the mind. Kim's mind is as sharp today as when she was diagnosed.

While born and raised in New York, Kim is a Utah State University graduate and Cache Valley resident. She was an interpreter for the deaf (American Sign Language) for 22 years before having to quit because of her illness. She has been an interpreter for many influential people including President Clinton during a rally for Senator Ted Kennedy.

The State of Utah only pays for 17 hours per week for Kim's care providers. This leaves Kim to pay for the remaining 6 days of the week, and she's exhausted her financial options.

You can learn more about Kim, ALS and donating to her care fund at www.keepkimhome.blogspot.com. You can also 'Live a Day in the Life of Kim' by watching this video.

Thanks for your support and participation! 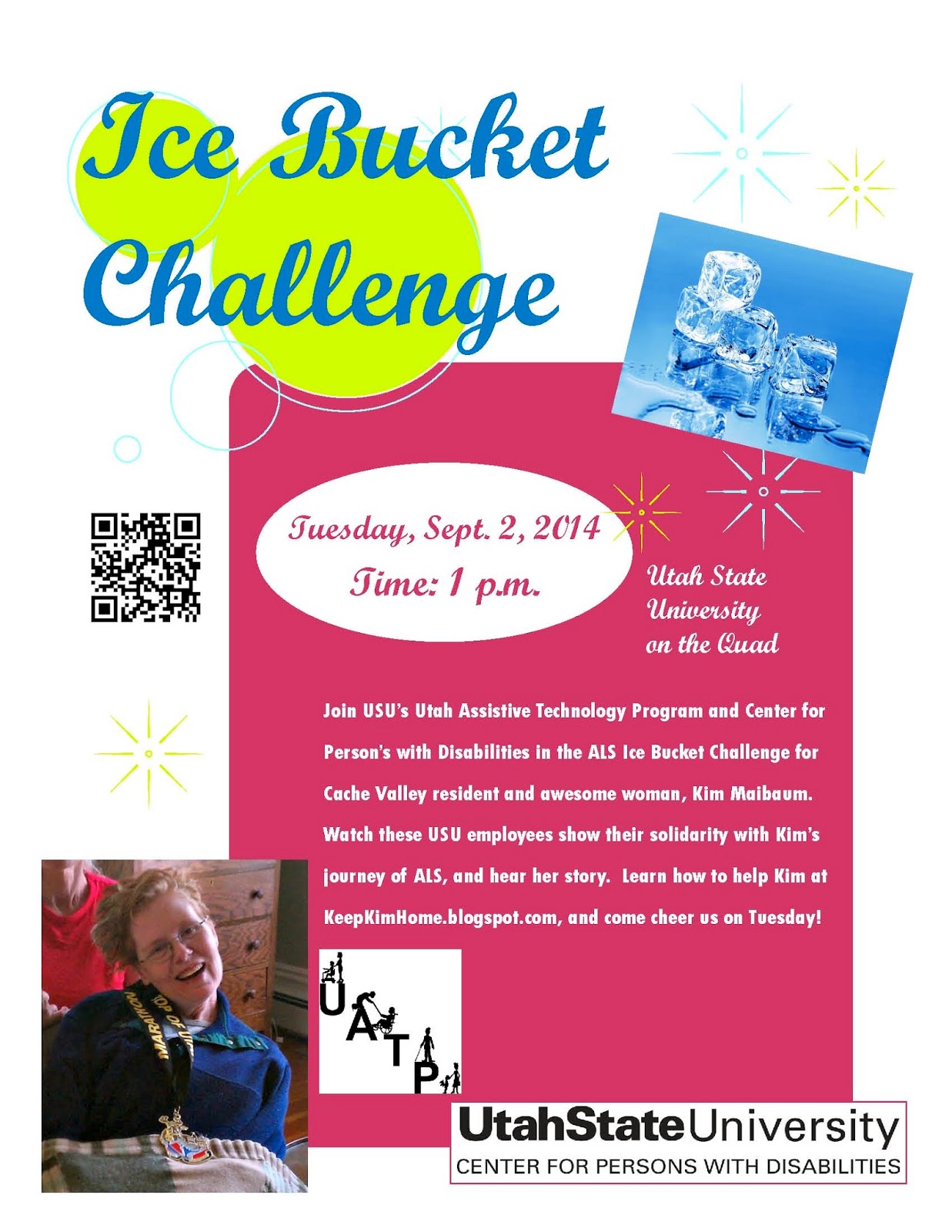 Posted by Utah Assistive Technology Program at 5:10 PM No comments:

Bingo night for advocacy group for people with developmental disabilities 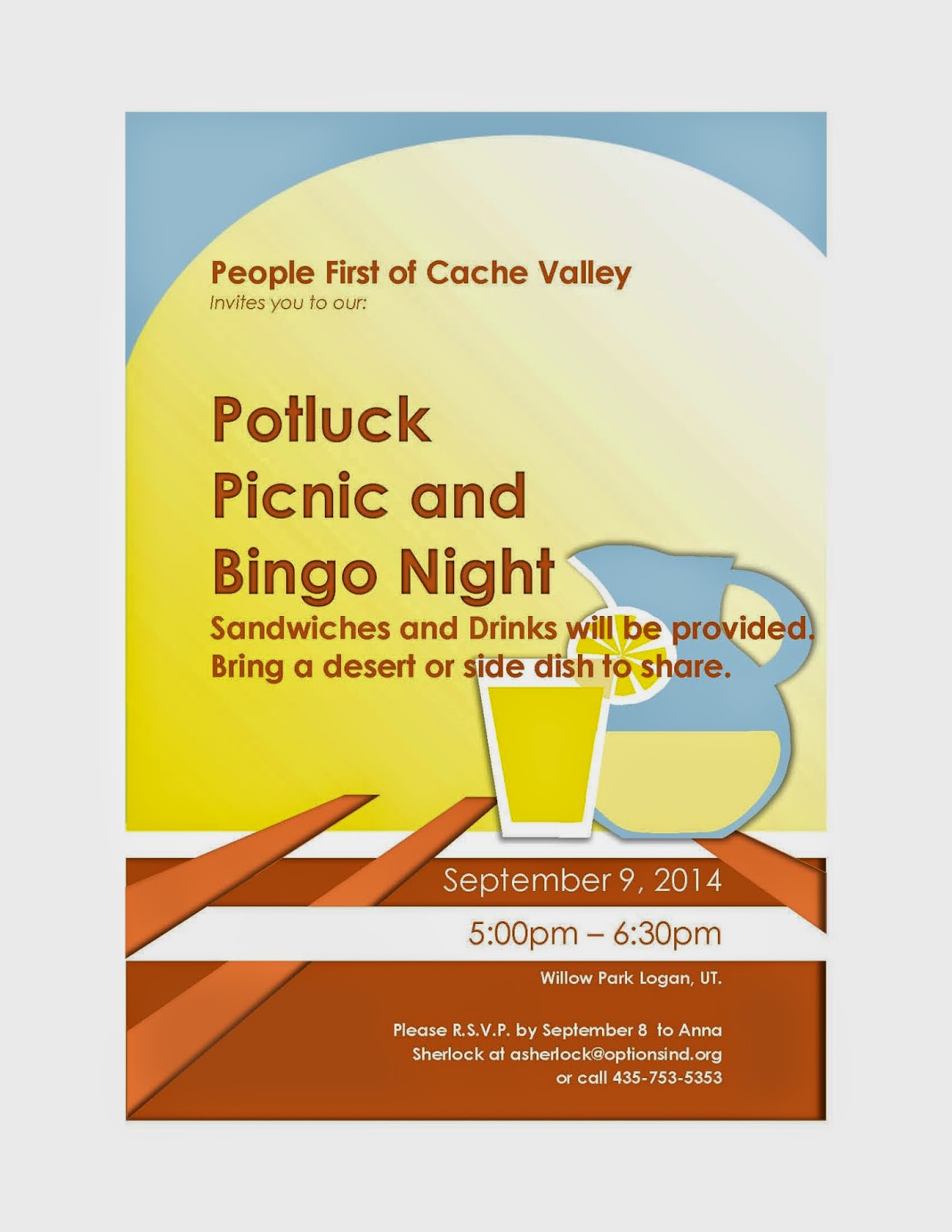 Posted by Utah Assistive Technology Program at 9:32 AM No comments:

Join us at the Cache Valley Hispanic Health Fair 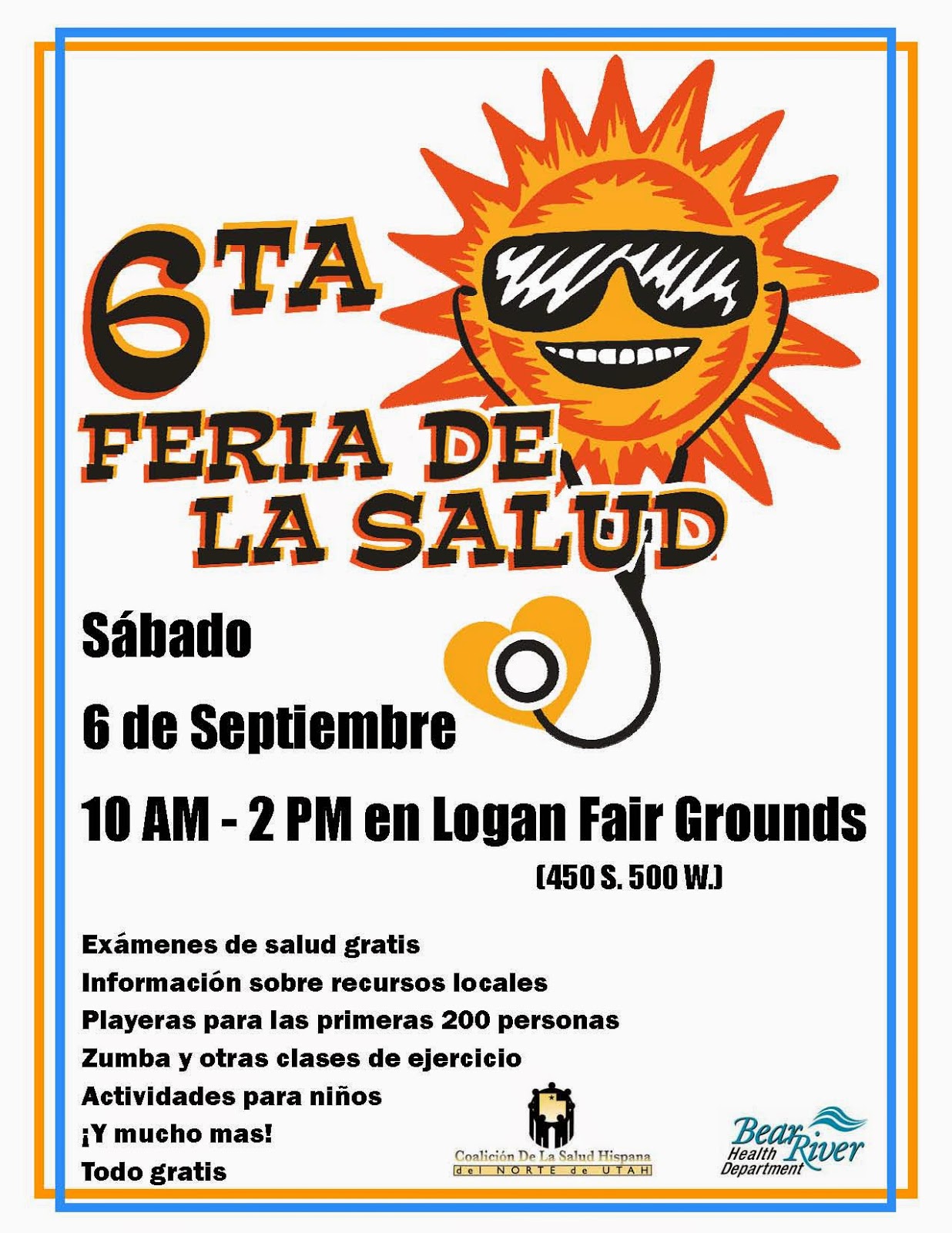 The Cache Valley Hispanic Health is Saturday, Sept. 6 at the Logan Fair Grounds. There will be health screenings, games for kids and of course the UATP! Come see us for a prize and to learn how we can assist Utahans with disabilities.
Posted by Utah Assistive Technology Program at 3:56 PM No comments:

Looking for a job in the non-profit sector? Something hands-on, mechanical and exciting?

Then check out CReATE's opening for a Wheelchair and Scooter Repair Technician.

CReATE, established in 2007, is a 501(c)3 that refurbishes donated mobility equipment and makes it available at a low-cost to Utahns with disabilities.

CReATE helps keeps mobility devices out of landfills by reusing them. Parts and chairs unable to be used are recycled with reputable area companies. The money earned is put back into CReATE.

This position is located in Salt Lake City. To learn more about this position, go to the posting on the Utah State University employment website: http://jobs.usu.edu/applicants/Central?quickFind=60543.

Posted by Utah Assistive Technology Program at 2:30 PM No comments:

One of our favorite apps that is used by many of the Utah Assistive Technology Teams (UATT) is SentenceBuilder for the iPad ($5.99).

This is a great language app that is simple, to the point and fun for kids to use. SentenceBuilder teaches students about grammar and descriptive writing. Students are shown a few columns of words and a picture. They'll use one word from each column, in a grammatically correct way, to describe the picture.

As an example, the first image below shows the incorrect sentence  structure and some choices that are given to make a correct sentence. If completely correctly, an animated image shows up on the screen with some congratulatory sounds applauding the student. If the sentence is not properly structured, an audio response tells the student they are “close but keep trying." 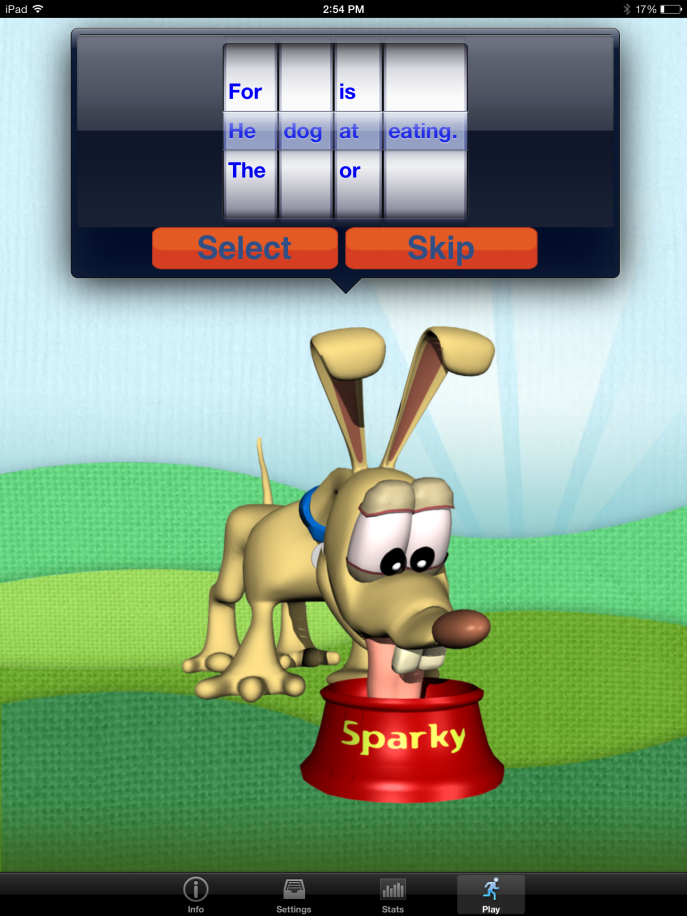 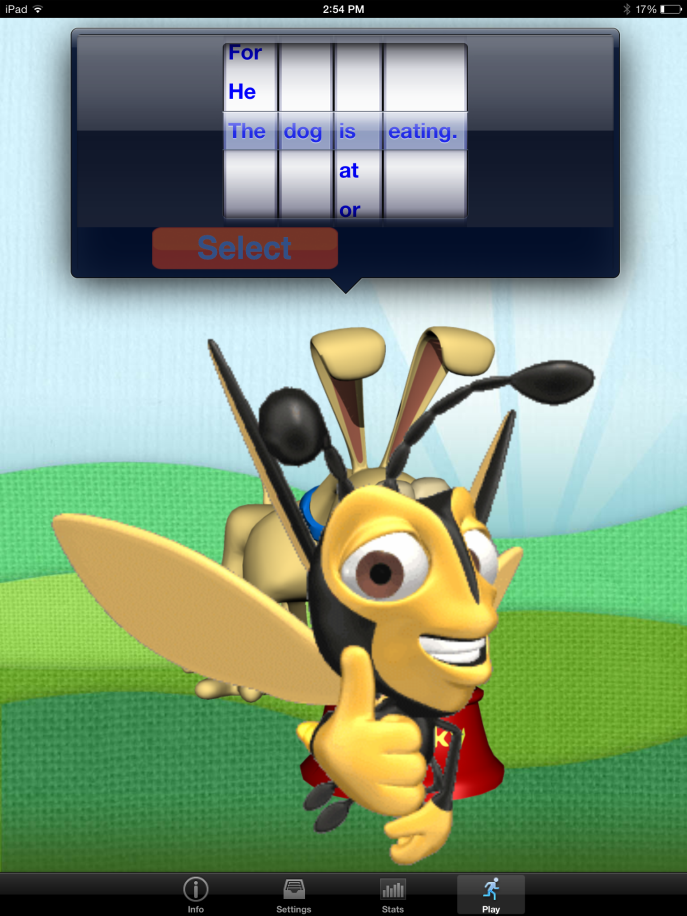 For example, they may see a picture of a cow holding balls and create the sentence "The cow is holding four orange balls," only to have it marked incorrect because the cow is only holding three green balls.

Stats track how many sentences students attempt and whether sentences were formed correctly on the first, second, or third try. 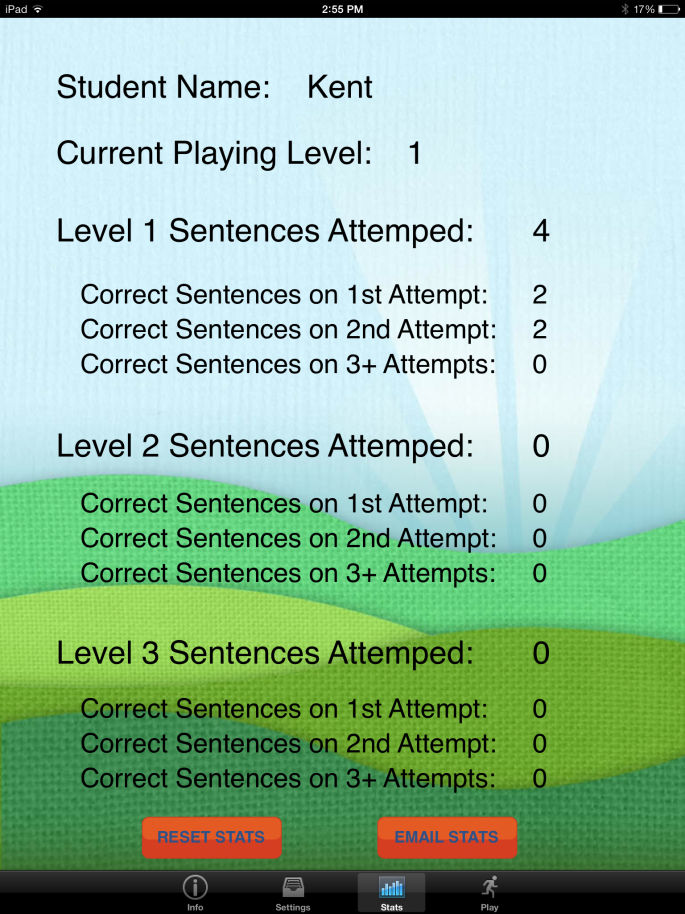 Despite the often cheesy animations and silly sound effects, SentenceBuilder has some solid academic potential. The company has worked with speech-language pathologists to showcase simple grammatical mistakes and common areas of confusion.

This app (among others) is developed by Mobile Education Store LLC (http://mobile-educationstore.com/category/apps).

Similar apps are also available for Android devices through the Google play store. A favorite is Sentence Builder by AbiTalk ($1.99) 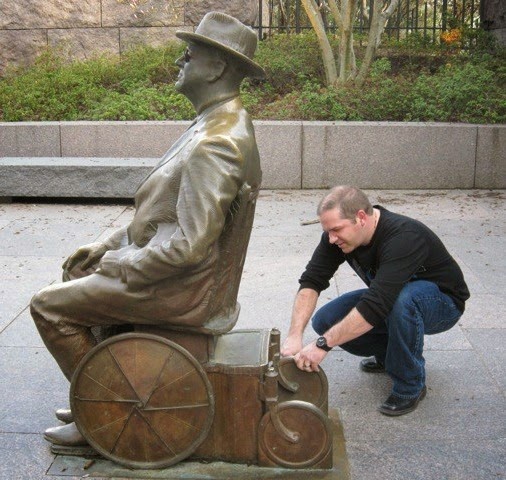