Even before he came to visit the Utah Assistive Technology Program this week,  Professor KG Satheesh Kumar said he and others from his center in India had gone through the UATP website and were inspired by what they saw.

They studied it and created their own strategy around it.

Kumar directs the Centre for Assistive Technology and Innovation in Thiruvananthapuram, Kerala, India. This week, he visited the AT Lab in Logan, learning more about its demonstration and loan program and the computer center.

While CATI's focus is early intervention, it has many of the same interests as UATP. Demonstrations and loans are important in India, he said; a healthy demo and loan program helps people make sure that the AT they buy is really the best option for them, and the best use of their money. People with disabilities in India typically have little money to use in buying AT.

"Awareness and training of people with disabilities and caregivers is our first priority," he said. "Our challenges are number one, creating awareness, and number two is selecting the right product."

Kumar also hopes to see the assistive technology industry grow in India. It will take technology development, turning that technology into products, manufacturing, sales and distribution, and after-sales support. "All of these are important, and in India, these are all missing," he said. The economy in India has not encouraged the development of AT on its own; people with disabilities typically do not have the dollars to spend on AT, so manufacturers don't find the sector attractive.

In the United States, the Tech Act is in place to promote the use of assistive technology. India does not have an equivalent, Dr. Kumar said, though laws in the last two years have placed greater emphasis on accessibility and accommodation for people with disabilities.

Kumar's visit to the Logan AT Lab and the CReATE program in Salt Lake City were part of a multi-stop tour to gain more information on how assistive technology is addressed in the US. He toured AT programs in several states and attended the Assistive Technology Industry Association conference that took place at the end of January in Orlando, Florida.

The Centre for Assistive Technology and Innovation in India started two years ago, at a time when the country is placing greater emphasis on providing accommodations for people with disabilities. It is located in the National Institute of Speech and Hearing, which has operated since 1997.

"NISH is being converted into a national central university," Kumar said. This progress comes amid encouraging changes in Indian society. "The previous practice was to hide disability within the family," he said. "That is changing. ... Now they are being cared for and educated."
Posted by JoLynne Lyon at 4:23 PM 2 comments:

Roosevelt AT Lab volunteer makes a difference in his community

ROOSEVELT--Sometimes, just going places isn't enough. Take going to the grocery store, for example. The whole point is bringing back stuff; often more than can fit on your lap.

That's where a basket would come in handy. Kenny Lawrence used to have two of them on his scooter, but when he gave it to the Assistive Technology Lab in Roosevelt and received a refurbished wheelchair, his new-to-him wheels came without a basket. It was just the right job for the lab's new, young volunteer.

The AT Lab in Roosevelt is part of the Utah Assistive Technology Program at the Center for Persons with Disabilities at Utah State University.

Mac Keel is a Union High School student who has volunteered at the Roosevelt AT Lab since the beginning of the school year. When Kenny suggested they add a basket to the back of the wheelchair, Mac brainstormed some ideas, then went to work.

"He got it welded up on his own," said Cameron Cressall, Roosevelt AT Lab coordinator. 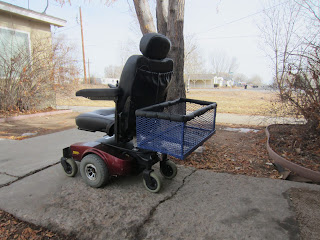 The AT Lab gives Mac a place to use his tool-savvy skills while helping other people. He has enjoyed all the projects he's worked on so far, he said. "It's all good. ... I just like helping people."

Amelia Garner, Mac's teacher, has seen the effect his volunteer work has had on him at school. "Hands on work is what he wants to do for his job, so this is really great training," she said. "I think this is building his self-confidence and his self-esteem. And Cameron is so good to work with."

Cameron, who spent a busy fall and winter at the AT Lab, has been glad for Mac's help. "He's been really great. He stays busy and follows instructions."

Kenny said the finished project should fill the need. "I think it's going to work pretty good," he said. "It's easy to put on."
Posted by JoLynne Lyon at 10:51 AM No comments: