Jacob and the big red switch 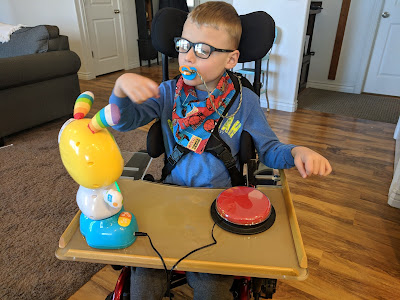 ROOSEVELT--A large part of a child's development is understanding that one action will set another one in motion. It is a basis for language and for a sense of interaction with the environment.

Jacob, a child with cortical visual impairment, is getting a better understanding of cause and effect, thanks to a toy with a big red switch. The modification to his automated toy was done at the Assistive Technology Lab at Utah State University in Roosevelt.

"Jacob has a vision impairment called CVI, so he doesn't see as well as the rest of us," said his mother, Cami Cook. With CVI, the brain has difficulty interpreting what the eyes see. Jacob takes longer to focus on an object, but he likes music.

Cami wanted him to be able to operate a toy that lights up and plays a song--two things that would attract his attention and help him focus. She also wanted Jacob to be able to activate the toy himself--something that was hard for him to do with the manufacturer's little built-in switch.

She took the project to Cameron Cressall, who coordinates the AT Lab at Utah State University in Roosevelt.

He opened the toy up and hard-wired a plug into the motor, drilling holes into the plastic so that the plug sat flush with the toy. The switch connects to the plug, and the toy is activated by a simple push of the hand. "A child that doesn't have the ability to interact with a toy with a little switch can play with it another way."

Cami said that with lights and music to attract his attention, Jacob is focusing more quickly. "He's starting to reach for the button," she said. "We're learning cause and effect."

Posted by JoLynne Lyon at 1:38 PM No comments: