What do you get when you combine a tiny bathroom, two conscientious parents and growing young man with multiple disabilities who uses a wheelchair?

Unfortunately for the Martinez family, it was an injury waiting to happen. It was important for them to bathe their son daily, but getting him in and out of the small bathroom space was dangerous for them and for him. Norma Martinez said they tried chairs designed for the bath for her son Gabe, but they were still unable to make it work for him in the space that they had. So they turned to the Assistive Technology Lab on the Logan Utah State University campus for a customized solution.


The AT Lab specialists designed a rolling seat that could be used to transport Gabe down the hall to a larger room with a Hoyer lift--a piece of equipment that lifts people into wheelchairs. They use towels to lift him out of the tub--an arrangement that spares them back strain.

"The chair worked out great," she said after giving it a test run. "We have more ideas to make it even better."

That's what the AT Lab does: find customized solutions for people with disabilities--usually for the cost of materials. You can find out more on the Utah Assistive Technology Program website. UATP is part of the Center for Persons with Disabilities at Utah State University.
Posted by JoLynne Lyon at 12:21 PM No comments:

The Utah Assistive Technology Program welcomes Caroly Hulinsky to CReATE in Salt Lake City. (Citizens Reutilizing Assistive Technology Equipment is UATP's reutilization program; we take used and donated mobility equipment, refurbish it and transfer it at a low cost into the hands of people who need it.)

Here is a quick Q & A with Carolyn.

Q: What do you do at CReATE?

A: I have a variety of tasks and don't do the same thing every day. I am responsible for maintaining the database by processing all of the transfers and purchases. I do any other office work that may be needed. I also schedule for delivery and pickup of chairs.

I am also very busy organizing, sorting and counting all of our inventory and entering it into the database. I am working to take the administrative work over from [CReATE Coordinator] Tom Boman so that he can have the time to work on and turn out more chairs. In time I will also begin to learn how to refurbish a chair... I feel like there is so much I can do and I want to learn.

I like working here at CReATE. I think it is so important to help individuals regain their mobility and facilitate their independence. I also think the volunteers and Tom are so fun to hand around as we work.

Q: How did you hear about CReATE?

A: I am a teacher in the morning, and I am co-teachers with Tom's wife. She told me about Tom and what he does. She later mentioned he was hiring someone to work in the office and help out with various things in the shop. It sounded like a really worthy place to work. I like helping others.

Do you have a background in disability?

I have a friend that has some experiences with disabling injury. My friend Chris Santacose is a paraglider. He had a traumatic injury that required him to do rehabilitation for a year before he was able to walk again. As a result he created project airtime.

I do have some background working with an individual with a disability. My sister-in-law had a major stroke when she was 35. I cared for her in my home for two years. I am still her guardian.

Carolyn, thanks for your time, and welcome to UTAP!
Posted by JoLynne Lyon at 5:10 PM No comments:


Meet Aaron. He has a ready smile and a love of light and sound, but he was also born with a condition that gave him low muscle tone. He spent a lot of time on the floor until a walker brought him closer to the level of his family.

"I bought it with the intention of hoping it would help him learn to walk, to help him with his core strength and give him another option besides lying on the floor," said his mother, Kimberly. The walker, which was a simple purchase from Amazon, was a great improvement--it helped him interact more with his family and he soon learned how to work its bells and whistles. Aaron also progressed from needing to be propped up with towels to sitting by himself in the walker.

He enjoyed it, but as time went on, Aaron kept growing. He is now two and a half. His legs were so long, it was like he was sitting on the floor with his knees bent. 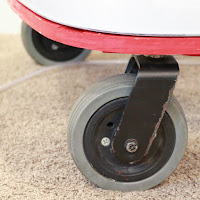 He is not walking yet. He and a physical therapist from the Center for Persons with Disabilities are working on it, and they've made a lot of progress, but meanwhile he needed some modifications to keep himself upright.

His mother, Kimberly, went to the Up to 3 program for help--and Up to 3 turned to Assistive Technology Lab in Logan. (Up to 3 and the AT Lab are both part of the Center for Persons with Disabilities at Utah State University.) The people at the AT Lab attached a wooden mount and some tall, after-market wheels to the walker, adding inches to its height. With the help of his modified walker, Aaron was standing again.

He looks happy in his walker, and Kimberly looks happy watching him in it. "He can move around," she said. "He's not strapped to a chair." 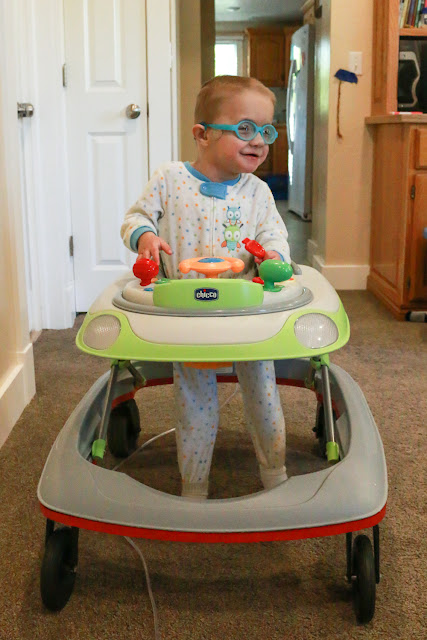 Posted by JoLynne Lyon at 10:09 AM No comments: