VERNAL--The Utah Assistive Technology Lab has changed its name and address. But when it comes to helping people find the equipment that keeps them independent, coordinator Cameron Cressall remains as dedicated as ever.

"Nothing is changing," he said. "We are still serving Duchesne, Uintah and Daggett counties."

The facility—now called the Utah Assistive Technology Program—has moved to 2574 West 500 North, #2 in Vernal. It remains part of the Center for Persons with Disabilities at Utah State University, and will continue to serve people who come to the office with an assistive technology need.

The Vernal location has a bus stop nearby.

In addition, Cressall said he will still travel to meet the needs of Uintah Basin clients outside of the Vernal area, though he encourages people to come to the office if at all possible.  “Just call and make an appointment,” he said.

Volunteers from both Vernal and Roosevelt helped Cressall make the move on Tuesday. "I am deeply touched by all the help I received," he said. "We got help from 4-H in Uintah and Duchesne counties, and community members of all ages helped us out, too. They showed up with three vehicles and two trailers. We finished the move in one night!"

"We had a good time and we really appreciate Cameron giving us the opportunity to help," said Traci Frost, 4-H coordinator in Uintah County. Her teen council showed up for some heavy lifting.

"Cameron does so much for a lot of people in the community," said Mindy Mair, who helped coordinate volunteers. "This was a way we could pay him back."

The change of address will help people in Vernal get to know UATP services better as well. The organization’s mission is to put assistive technology—or devices that improve or maintain independence—into the hands of Utahns who need it. Clients can access UATP’s demonstration and loan library to see what devices are available and try before they buy. They can receive refurbished equipment or even work with Cressall to customize AT for their particular needs. Finally, people can apply to UATP for small grants or loans to make assistive technology more affordable.

Over the past year, 214 people received either a loaned, custom-built, adapted or refurbished device from UATP in the Uintah Basin. That equipment helped people's mobility in their homes and communities. It allowed them to adapt their homes to accommodate a disability, to learn at school, or to work independently.

UATP also has locations in Logan and Salt Lake City. The small grants and loans are available to Utahns anywhere in the state.

For more information about UATP in the Uintah Basin, contact Cameron Cressall at 435-767-1719 or visit the UATP website at uatpat.org.

Posted by JoLynne Lyon at 11:15 AM No comments: 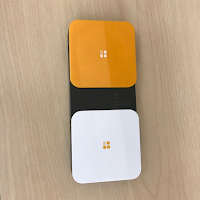 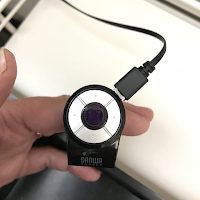 If you live in Utah and would like to find out more about assistive technology that could work for you, visit the UATP website or call 800-524-5152.
Posted by JoLynne Lyon at 5:14 PM No comments:

Logan man keeps up with work, avoids injury thanks to loaned scooter

LOGAN--Dean Luthi had some difficulty standing and walking at work at Lowe's in Logan, where he ran the self-checkout. He talked to his manager and they gave him a parking space close to the store and tried putting a seat in his work station. They put his employee card on a lanyard so that he could easily scan it at the register when he needed to help a customer.

Still, the up-and-down action was difficult. Once, Dean fell and had to miss work. "I was out for seven days and I messed up my shoulder," he said.

Most days, injury or not, he was worn out by the time he went home. He was also having a hard time using the break room--it was just too far away.

His manager, Joey Wolford, knew the problem was real. "Dean's a ray of sunshine. He probably has the best attitude of anybody I've ever met," he said. "If he could work here all the time, he would."

Mike Stokes, who volunteers at the Utah Assistive Technology Program in Logan, saw Dean as he was there at Lowe's, picking up some materials the store had donated for a different UATP project. He also saw Wolford in the store.

Stokes and Wolford arranged an introduction with Luthi, and the work began to find a scooter he could use on loan from UATP. They found one, and Luthi began working more safely.

"When I got the scooter I didn't have to worry bout falling," he said.

He also received a walker on loan from UATP to help him walk the halls of Bridgerland Technical College, where he is studying to be an auto and diesel technician.

Information about equipment available for loan from UATP is available in an earlier post.
Posted by JoLynne Lyon at 2:22 PM No comments: