The Life of a Wheelchair at CReATE 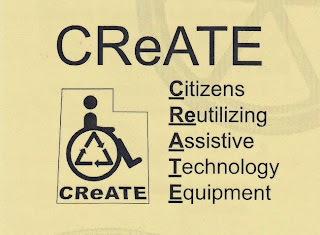 Ray Rasmussen was stuck. With his wheelchair falling apart, his mobility was limited and his freedom had been compromised. That's where CReATE, Citizen’s Reutilizing Assistive Technology came in.

Tom Boman, the technician for CReATE, looked at Rasmussen’s needs and turned a recycled wheelchair into freedom for Rasmussen. An ordinary day in the life for Boman, reutilizing assistive technology equipment for the needs of people like Rasmussen.

It was Rasmussen’s cousin, Jim Graehl, who brought him to CReATE after hearing about the wheelchair services from a local medical school. He recalls the difficulties of finding a chair that could meet all the physical requirements for his cousin, noting a collection of broken chairs at Rasmussen’s home.

"The value of CReATE was really driven home for us when Ray broke his first chair,” Graehl said. “He's not eligible for a new chair from Medicaid for two years.”

There are no waiting periods or disability proof requirements at CReATE, helping fill the need of those unable to get one through insurance. After receiving the new chair from CReATE, Graehl donated three of Rasmussen’s previous electric wheelchairs in need of repair.

"One of the chairs Ray had was a bigger, more industrial chair. Tom [Boman] said it was hard to get, but easy to reutilize,” Graehl said.

Reutilize he did. Boman worked his magic and now Rasmussen’s old chair belongs to another client Peggy Naud. As a resident of downtown Salt Lake City, Naud received her chair after her electric scooter lost power. Learning about CReATE from the United Way, Naud felt relieved when she visited the shop.

“I walked in that place on my crutches and it felt like there was a million chairs in that room,” Naud said. “When I saw all those chairs it made feel like I wasn't such a sore thumb sticking out in the crowd.”

After consulting with Boman about her specific needs in her mobility chair, she left the shop gleaming in Rasmussen’s donated chair.

“It was an old, Jazzy 1170 wheelchair,” Boman said. “We took that chair and combined with parts of others for Peggy.”

Since many parts of the chairs and scooters are interchangeable, everything either gets scrapped out or refurbished, and goes back to someone.

“We take a look at whatever chair has the best possibility to meet the client’s needs,” said Boman. “It really is the gift that keeps on giving.”

As Naud explores her downtown neighborhood, new chair in tow, she frequents many of its shops and events. Recently she bought season tickets to the Utah Opera, attending “Madame Butterfly,” as she sat in Rasmussen’s former chair with her daughter next to her in the aisle seat.

“It was marvelous! The chair makes me taller than everyone else around me, so I had the best seat in the house,” Naud said laughing. “Nothing keeps me from getting downtown.”

Graehl recalls similar feelings after discovering the services at the shop.

“The lack of freedom and loss of freedom was really difficult for Ray, but having those guys [CReATE] available to help us is a huge benefit."


Visit the CReATE webpage to learn more about the many wheelchairs available, or call 801-887-9398 to speak with a technician.
Posted by Utah Assistive Technology Program at 4:29 PM