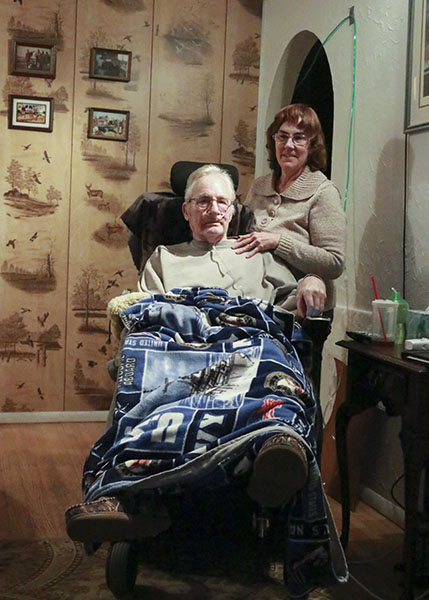 In the last year, the Utah Assistive Technology Program opened an AT lab in Roosevelt. Since then we have provided services and made new friends in another part of the state. Here is the second in a series of stories from the Uintah Basin.

VERNAL—Cathy Johnson heard about the Assistive Technology Lab in Roosevelt before it even existed. When she saw a flyer announcing that one was being considered for the Uintah Basin, it felt personal.

“I’m a special educator, so I was interested for work, and for my husband,” she said.

Her husband, Jerry, had been diagnosed with multiple system atrophy (MSA), a rare neurological, degenerative condition. When the AT Lab came to the area, she contacted them looking for specialized eating utensils and communication boards. Roosevelt AT Lab Coordinator Cameron Cressall and Logan AT Lab Coordinator Clay Christensen demonstrated some options and evaluated the family’s needs.

“Those were our first two concerns at that point,” Cathy said. But in addition to the evaluation, Cressall also came with eight pages of information on MSA.

“They understood the progression and how our needs would be changing,” Cathy said. “This is huge!”

Later, lab coordinator Cameron Cressall came back with a specialized rail for the bathroom. It folds down and lifts up for storage, so it takes up less space.

It was a piece of donated equipment, said Cressall. “We’re like a hub. People want to share what they’ve had and used with others that it can help.”

It’s a good thing, because assistive technology can be expensive off the shelf. Cathy knew this from her own experience; from searching online for things that weren’t quite the right fit, or ordering a device in that didn’t quite work.

Still later, Jerry needed a new chair. Cressall brought in a demo chair so that they could try it out, then connected them with a provider who could arrange for a new one. Jerry is nonverbal now, but when asked how he liked his chair he gave a big thumbs-up.

Once, when the chair crashed into a wall, Cressall helped fix it. “Instead of the warranty work and waiting for a vendor to come, we can fix certain parts without jeopardizing the warranty,” he said.

So what would the Johnsons have done without the AT Lab? “Cried,” Cathy said, “Or just made do.”
Posted by JoLynne Lyon at 3:22 PM

Email ThisBlogThis!Share to TwitterShare to FacebookShare to Pinterest
Labels: AT Lab, Roosevelt